Improv games began in theatre and drama for actors to practice their skills before taking on the big stage. It is an entertaining way of building cohesion in groups, developing confidence, and strengthening teamwork. You can also have improv games to play virtually in your remote teams.

In this article, you will find the following:

Here we’ve picked the 20 Best Improv Games we know will help you and your remote teams connect despite the distance. You can find a full list of facilitated virtual events on our platform. 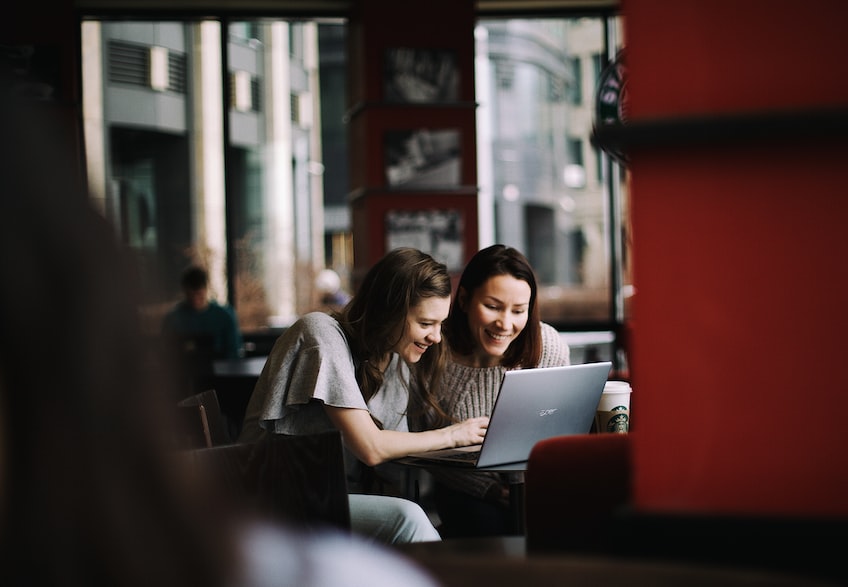 This is an easy game to play, whether in a physical or virtual environment. It’s a test of adaptability, of thinking outside the box, and preparing oneself to walk in any situation, whether comfortable or uncomfortable.

After that, pairs can reverse roles and do the same exercise again. There’s no correct or wrong solution in this game as long as the person assigned can quickly come up with one. Book a session to get started with the fun Workday Update.

This is also another fun game in getting to know your teammates a little bit deeper with a little bit of fun.

See How We Can Unite Your Team
While Saving You Huge Amounts of Time
Activities Teams Love -
Find the perfect selection of team-building events.
Manage Events Company-wide -
Manage your team events with ease
Book A Call

Each participant shares a quality about themselves and acts out a gesture or movement that represents this quality. The rest of the participants mimics the gesture.

Another version of this activity is for each player to act out the gesture without saying the quality verbally. The group then guesses what quality the player is trying to portray.

Get inspired by some inspiring Improv Games.

Words grouped may form a thought, a sentence. A series of sentences going towards one thought may tell a story. That is exactly what this activity is all about. It demonstrates storytelling, vocabulary, and ultimately storytelling.

One person starts by providing one word to start, and the next person gives out another that will connect with the previous word. This goes on until a story forms. You’ll be surprised at how the story will turn out and what your group can come up with at the end.

Our comedian, Gianmarco, will only need one word from you to create an amazing story to entertain you all. 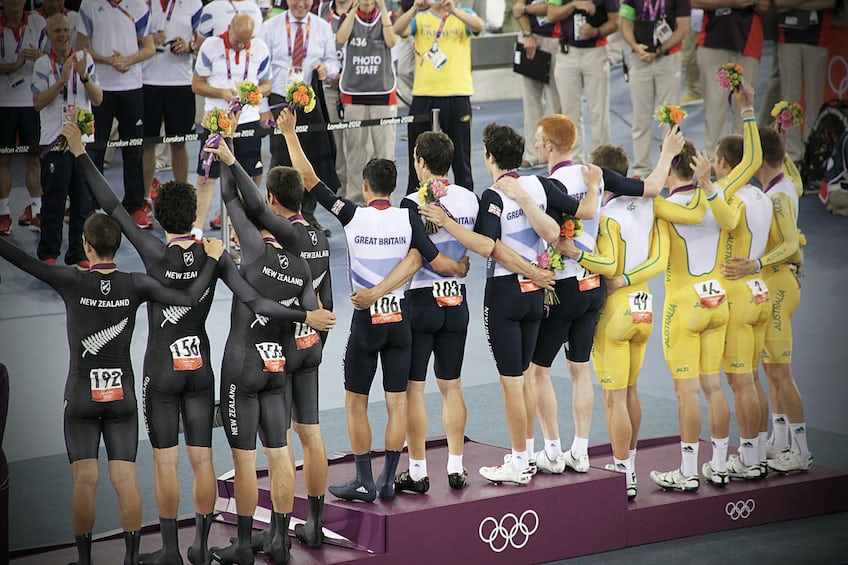 This is another easy game to play that isn’t just limited to virtual teams. It involves each participant practicing active listening.

A group of 20 or more people will count from 1 to 20, one person at a time but will not follow a specific order or pattern. Two people may say the same number at the same time. When this happens, the group will have to start over from the beginning. 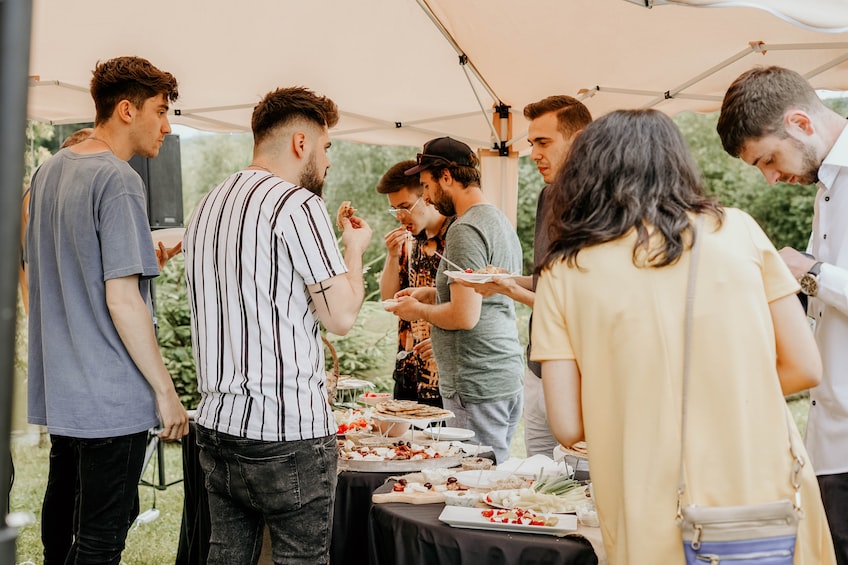 Although used mostly in drama groups, this improv game is still great for remote environments as a warm-up game or as an icebreaker.

To start, one player state the activity, everyone replies with “Yes, let's!” and acts out the given activity. For example, the player says, “Let’s jump in place”. The rest of the group then shouts “Yes, let's!” and starts jumping in place. Continue the routine until everyone had the chance to make their suggestion.

This is an improv game that improves communication and focus. The name of the game speaks for itself but this is how it goes. 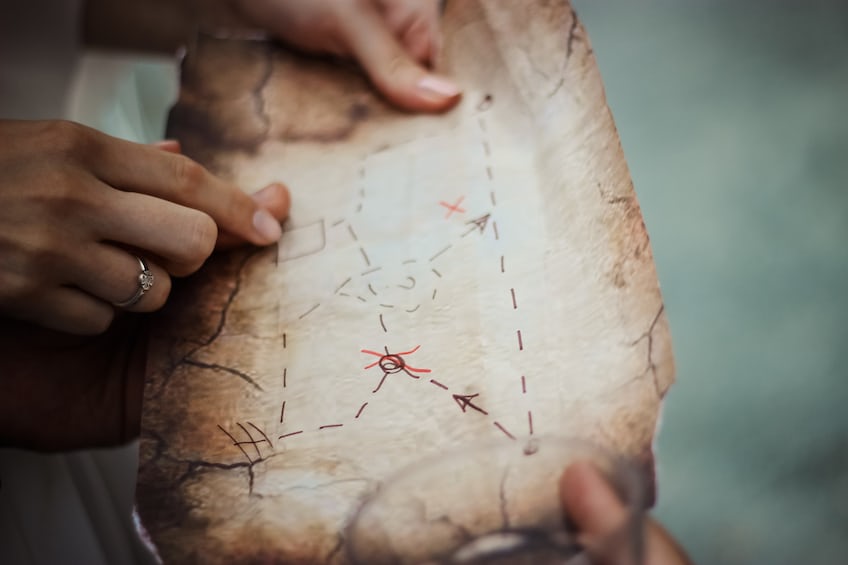 Like charades, this is a guessing game ideal for 10-15 people since it will require pairings.

For this to work, each player must have an identifiable location in mind like the mall, the park, or the school. With a certain location in mind, the player will then act this out without verbally stating what that location is until someone from the audience has the aha moment and gets it.

How many ways can one object be used? Or better yet, how far can our imagination go? In this game, creativity will be put to the test as participants think of new ways an old invention can function.

You may have probably played this game in grade school or even high school in your English class. There’s a good reason why this is one of the best improv games. It banks on active listening, which is an important skill when it comes to effective communication.

To play the game, one player states a sentence verbally. The next person then starts the next sentence using the last word of the sentence of the previous player. Players who aren’t able to make their sentences correctly are disqualified and taken out of the game. This goes on until a winner emerges. 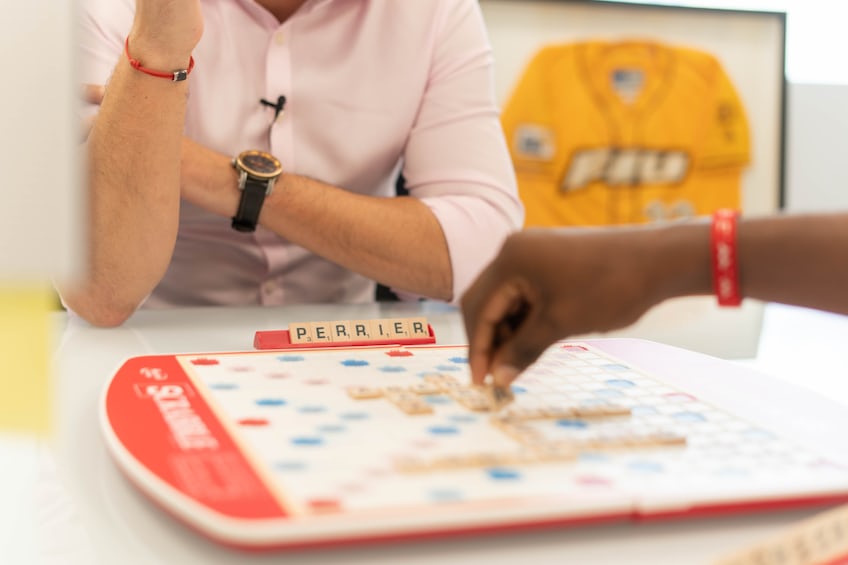 Just another game to let loose while thinking quickly on your feet? We’ll take it! Ideal for a group of 5-10 people, this improved activity is all about free association and just having fun.

Much like the one-word story, this one is also about honing your imagination, creativity, and communication skills. Who said Zoom has to be boring? Play to Zoom Show today!

One player starts by saying a few sentences like, “Once upon a time, there was a lady who lived in a faraway land. She lived in peace and harmony until one day …” Before the first player finishes the sentence, it’s passed on to the next person to continue the story.

Everything is made randomly and in an impromptu manner until the story is finished and everyone was able to contribute their piece.

This is similar to the Customer Service Face Time but in this case, two participants act out as friends talking with each other over face time. There’s no format to follow and their dialogue are entirely impromptu. It’s a good communication exercise and storytelling exercise that you can use in your next team huddle. 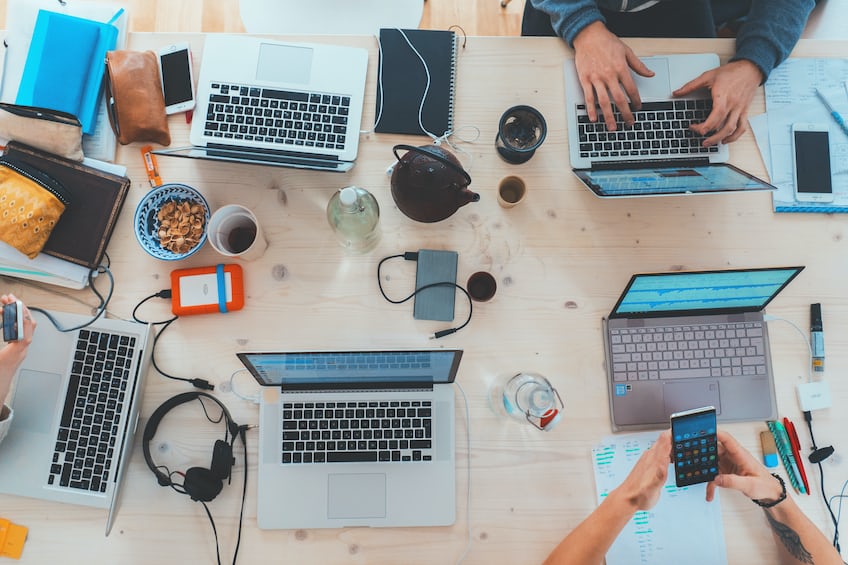 Family portraits have a distinct character about them, don’t you agree? Gather a group of 15-25 people for this activity.

In this game, each group is given a title for a family picture that they have to mimic and pose for. It’s a comical family tableau! Some examples are “Family of Aliens”, “Family of Chickens”, “Worried Family”. There’d surely be laughter all around this session as players portray the funniest characters. Fall in laugh with your team!

This is another entertaining characterization game wherein players are given an animal name a situation wherein they’ll have to act out in that anima’s character. For example, “A Camel in an Art Gallery”, “A Leopard in the International Space Station”, or “A Snake in the Supermarket”.

Give the players time to improvise their act as the rest of the group guess the animal assigned.

The original version of this game is for a player to say Zip, Zap, or Zop then point to another player afterwards. For virtual purposes, you can tweak the game to better suit your remote teams.

In this game, participants need to prepare drawing materials like paper and a pen. One person starts by saying a noun and the next person pairs that up with a verb. The rest of the group then draws the two words into one image together.

For example, the first player says “bottle” and the next one says “dancing”. Then the group draws a dancing bottle as a result. Give your participants ample time to sketch and ask them to show it to the screen together. This will surely send some giggles and hoots along the way. 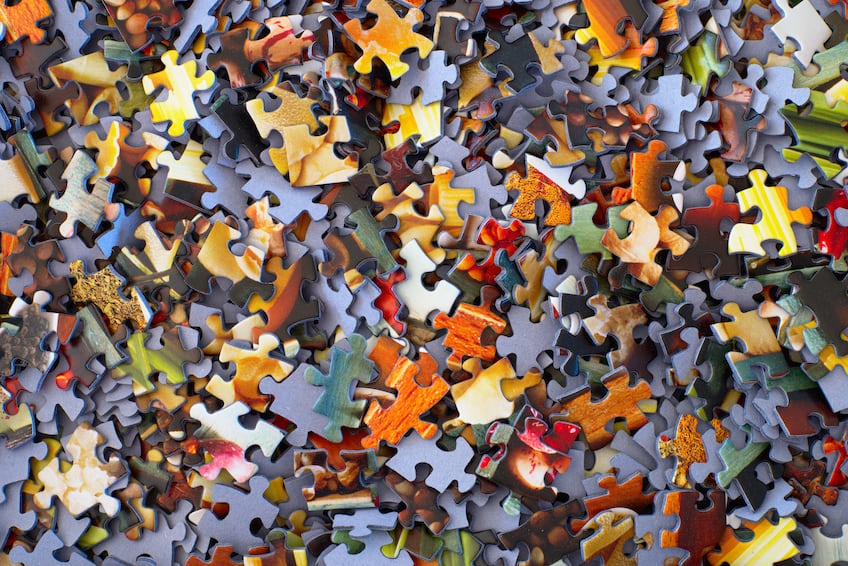 This activity is a little bit deeper and not recommended doing the beginning of workshops or for groups of people who have only met a few times. However advanced, it is worth the shot.

Two people start with one person acting out a certain emotion nonverbally and the other person will try to read the emotion. Once successful, they switch roles and do the same exercise again.

It’s a little bit like acting. Some emotions may be hard to express nonverbally like guilt, overwhelm, resentment, failure. The idea of the game is to draw personal experiences to portray the specific emotion.

This game is the virtual version of Stop, Go, Jump, Clap. The facilitator asks the group to do these simple actions for each function: ‘Stop’ for stop, ‘Go’ for pretending to walk, ‘f ace’ is for making a funny face, and finally ‘Clap’ is for clapping your hands.

The facilitator starts the activity slowly, saying each word one by one while the participants act out the corresponding action. Just when everyone already has it in momentum, the facilitator speeds up and switches from one word to another in random order. It’s a simple yet effective way of introducing self-awareness and active listening.

Make an elimination round on every person who fails to make the correct action until one is left and wins.

Here’s one of the effective improv trust exercises, one for empathy and support. This game is apt for medium to large groups. I’ve switched up some instructions for it to be fitting in a virtual environment.

In a group, one starts by verbalizing this statement, “I’m looking for people who, like me, (insert a personal characteristic).” Everyone who relates to the same characteristic sends an emoji or unmutes themselves and claps. The game goes on until everyone has had a chance to share.

You can start with the obvious ones like, “I’m looking for people who, like me, have long hair”. Naturally, the goal of the exercise is for people to share deeper truths about themselves. 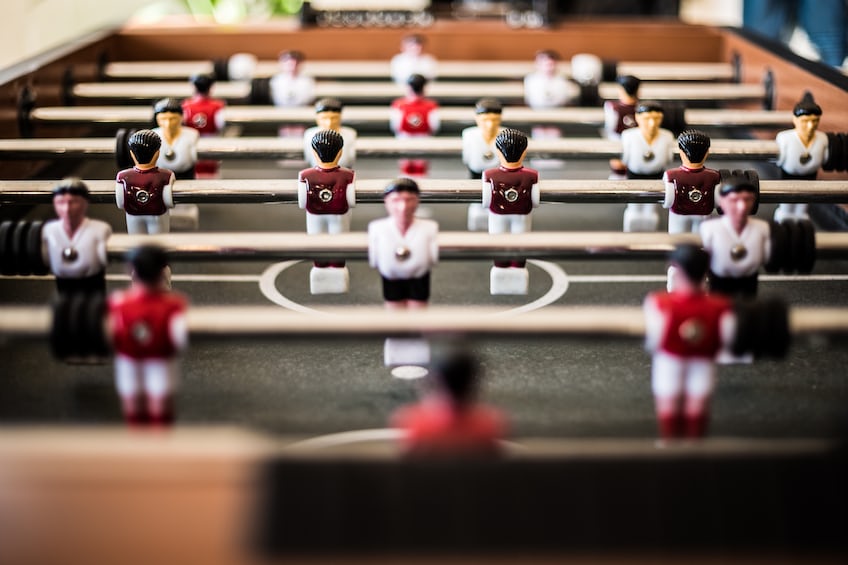 The first player starts by making a face and show it to the person next to him/her. The next person then has to mimic the same face and create a new one after. Players must name the person they want to go to next.

This goes on until everyone has had their chance of passing a face. This game may be silly but it’s really all about creating awareness.

There are many ways to incorporate improv exercises games in your remote teams. We hope that you found our suggestions helpful as you plan out your team’s next huddle. For more ideas like this, check out this article on 5-minute team building activities or head over to our resources section for more.

What are improv games?

Improv games draw inspiration from improvisation theatre, where actors portray characters, go through plots, and live up to dialogues made up on the spot. When talking about improv, spontaneity always comes into mind. In theatre again, improv plays often take suggestions and ideas from the audience and translate it into a full story on stage. More and more organizations use improv games in their teams to foster organizational awareness and skill development.

What are the best improv games for large groups?

Here are some of the best improv games for large groups from our list that you can try on to your respective teams:


Some of the games not mentioned can still be done for large groups. All you need is a little bit of creativity and improvisation.

Why should you play improv games with employees?

Harnessing soft skills is one of the reasons why you should take a look at improv games. Improv has always been known in the theatre space to develop an actor’s confidence, active listening, and quick thinking. In work, it shines a spotlight on each of the following skills:

Get remote-work tips delivered straight to your inbox
Do you want
to unite your team?

Hey, we're Onsite.fun. We're determined to help you organize and manage team building events that your team will love.

Book a Call
About Onsite.fun

We're Joan & Jaume, co-founders of Onsite.fun. Two brothers that joined forces to make distributed teams more united than in-office. Onsite.fun is your one-stop shop to manage and organize team-building events company wide. We find the most remarkable activities online and wrap them on a suite of tools that make them easy and convinient to book for distributed teams.